On view only Friday October 22nd, 6pm-midnight, at Union Walk, E2, London (right off Waterson St., between Kingsland Rd. and Hackney Rd – scroll down or click link above). For more information please contact Felipe Mujica by email or calling 07986 754959.

GCH promotes the work of young artists through the organization of exhibitions and talks. The main feature of GCH is the lack of a physical space. Our shows have happened mostly in commercial locations that are dealt directly with the estate agents through mutual benefit agreements, “cultural visibility trade” or simple diplomatic manoeuvres within an entrepreneurial disguise. Originally, the nomadic strategy of GCH worked as a critique, question and expansion to the Santiago contemporary art circuit, which in the late 90’s was composed mostly of either very traditional commercial galleries or government funded non-profit spaces (with unclear curatorial decisions). GCH’s nomadism was as much an economical solution as it was a takeover of the growing condition of Santiago in the years of transitional democracy and macro economic wealth –we used new/unused spaces that where left behind. By now, GCH’s mobility and economy of mediums has evolved, and moved away from the gallery frame to become more of a collaborative instance for group experimentation and encounters; a non-place for discussion, a non-place for joining forces.

Condoros/Mistakes is a painting exhibition based on Condorito, a Chilean comic strip that has been widely distributed throughout Latin America for over 50 years. Born in 1948 as a straight response to Disney’s Mickey Mouse, the stories of Condorito throw light over important facts of the Latin American archetype and general stereotypia. Condorito plays any role, does odd jobs, travels freely through history and society, its ingenuity and spark always being filled with prejudice, sarcasm and cruelty. He lives in Pelotillehue (Ballton?), a generic little town that is both extremely local and global, existing in any time and place, out of the now and all the components that build our notion of reality. Whatever it is that connects the stories in Condorito with our reality looks like it has been there before us, and it will stay there after us.

At the core of the idea of this show, what called our attention at first was the role of art inside the comic strip: when Condorito visits an art show, or becomes an artist or gallerist, most of the time what we see is a show of “modern art”, with great masters of the 20th century, cartoonised. In general, art within Condorito, a classic piece of history or a kiddie doodle, can never escape from being punked. It might be interesting to analyse how this presentation of the modern, ridiculed and despised, might still be the closest approach to the art world for a really wide audience of readers of Condorito throughout the third world.

The curatorship of Condoros/Mistakes focuses on a technical profile instead of the contents of the works –just like the magazine includes good and bad jokes, about different subjects. It’s a risky move, an open curatorship without vanishing point; there is no theory to illustrate, no exposed problem and no suggested solution, just a bridge that leads to a world away. Artists were invited to produce an abstraction, a cartoon of their own work, or to drown in a tide of familiar images. There was a maximum size, a rule to produce a “rollable painting on canvas” and a restriction to use exclusively the colours of the print of Condorito magazine (i.e. orange, black & white). The result of the call is a number of paintings, some of them fashion elements from the comic, some relate to the particularities of one artist… but the exhibition is still not about the comic or the characters in it, it’s about itself, about how it develops and adapts to different environments, and about how this show, as always, redefines and adds a new layer to GCH history. The show aims to place the viewer within the weirdness of a strange place called Pelotillehue.

This exhibition was previously presented at Galeria Metropolitana, a non for profit gallery located in a peripheral zone of Santiago, a raw metallic warehouse built right next to the home of its owners. (Luis Alarcon & Ana Maria Saavedra, galeriametropolitana@hotmail.com)

For its London happening, Condoros/Mistakes has received the kind support and guidance of 24/7 Gallery (Pablo Leon de la Barra, Sebastian Ramirez & Beatriz Lopez, ), Gasworks Residency Programme (Alessio Antoniolli & Mia Jankowicz, http://www.gasworks.org.uk) and it’s been partially financed by DIRAC, Cultural Division of the Chilean Government Ministry of Foreign Affairs. Thanks to everybody for everything.

… and the floating condition of Condorito, whose only constant is not belonging and temporal disjointment. 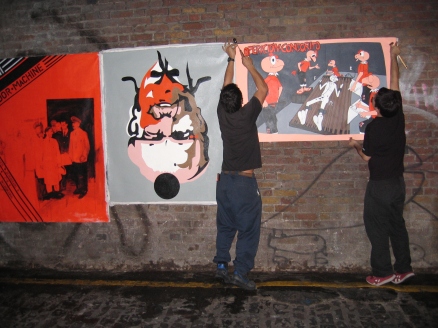 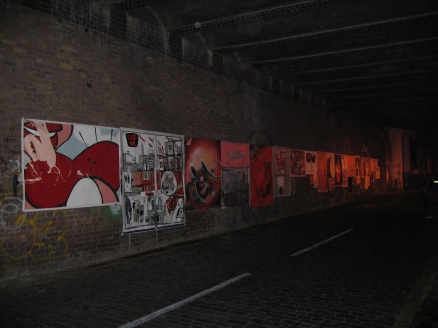 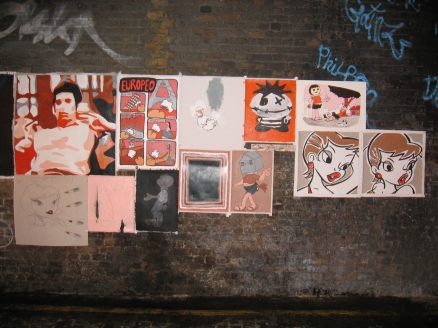 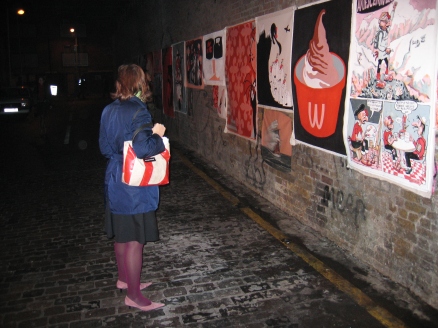 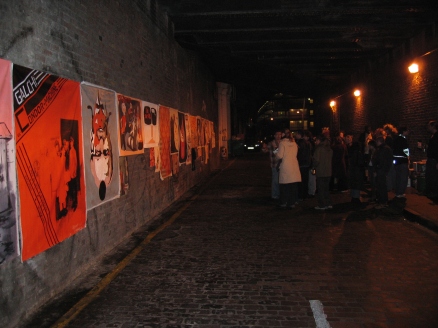 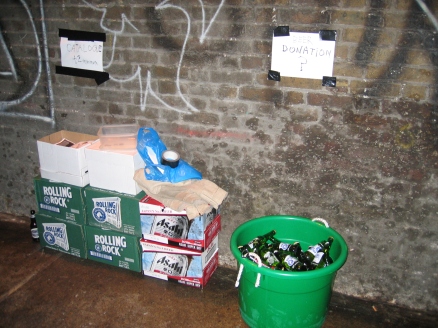 So WE ARRIVE in £ondon around october the 5th, and WE DIDN’T really know where we were standing at. WE THOUGHT the best time to do the show would be parallel to the FFF 2004 (Frieze Fair Frantic) WE HAD a couple of place possibilities to set the show: a company basement on Rosebury Avenue in Clerkenwell, an empty apartment in Long Street, in the East End. WE CHECKED these spaces and WE WEREN’T really dissapointed, but WE THOUGHT, since the main characteristic of GCH is the lack of space and the following need for spaces that are specifically chosen for a certain exhibition form, these spaces are privated of something fundamental: a little soul to it, something in the spirit of CONDOROS. So WE WENT out looking for new spaces, deciding the East End would be the best place to land, because WE KNOW people usually won’t travel much to go see an art show by unknowned foreigners, so the OOBAH-DOOBHA blocks around Hoxton/Hackney/Shoreditch would be right on the way to the local hole or some more familiar venues. So WE ARE walking around the neighbourhood taking notes and eleven-cypher-numbers from old front store’s awnings: a pet shop, an old hair saloon, a flower shop, little spaces, old, frayed, fucked up, dirty –WE LIKE to call it “character”. WE MEET the Tower Hamlets Property Services officials, WE UNDERSTAND the “unreal” quality of our timing and the strangeness of our requirements, specially with a budget quite close to nil. The following strategy happens through personal interviews with random honest well intentioned beautiful people that WE MEET at openings, after parties, bars where you can smoke at. Everybody thinks the idea is wikkid and bloody brilliant and everybody knows somebody, an artist friend who lives in a bigass loft, who’s got access to a kinda-gallery usually interested in crazy last minute projects. WE SPEND hours calling people WE DON’T even know how they look like: “…Hi, this is Galeria Chilena, WE ARE an art clique from Chile, WE ARE trying to organize a painting show here in £ondon by this weekend…” people freak out. Somebody tells us the british “need to know in advance”, and it’s fully understandable.

Pablo’s house was our headquarters, and most trips in search for place started passing through the underpass of UNION WALK, just a block away from Pablo’s. Time is running out, WE VISIT a burnt house, a micro cinema, a photo studio, a bar, WE THINK of squating Damian Ortega’s “Spirit” piece for White Cube on Hoxton Square and just plaster the paintings on it for one night. At this point the story of why WE CAME here, how WE THOUGHT of the show and all of our good intentions and hopes about it comes out of our mouths as a strip of tied colorful napkins comes out of the mouth of a dreaded magician. This drains a lot of vital energy out of you and it also kills the surprise.

The choice of hanging Condoros on Union Walk comes out as a better option, the best. WE KNOW opening night is what’s all about so why doin a week long show?–a week during which three sleepy people would come by as you freeze and drool in a lonely art room.

Condoros is a show about stereotypes, and putting it down on Union Walk is all about the stereotype WE SOUTHCORNERS had about £ondon: a cobble stoned dark alley roofed by rail tracks, where turds and piss greet you as you hurry up along the written brick walls. WE GREW up thinking of £ondon as street, punk, rock, puke, alcohol… fog, of course. Not only Clash Pistols the Ripper John Merrick et al. It’s always dump when we think of £ondon; it’s perverted, dirty and somber. Painfully attractive indeed. In total independence, this bridge where the gutter becomes a gallery and viceversa, under the big wing of being a citizen of the modern age. The bridge has light and roof and location. One of the lights gets on and off every minute. Commercial or friendly aquired spaces are steps we have already taken, now WE TRY to revisit the city, appropiating its base, standing at the edge of the oldest laws. So thank the godess drinking in the street is allowed here in £ondon, art opening without booze is useless as tits on a board.

Cheers to us all, hail the andean vulture! GCH